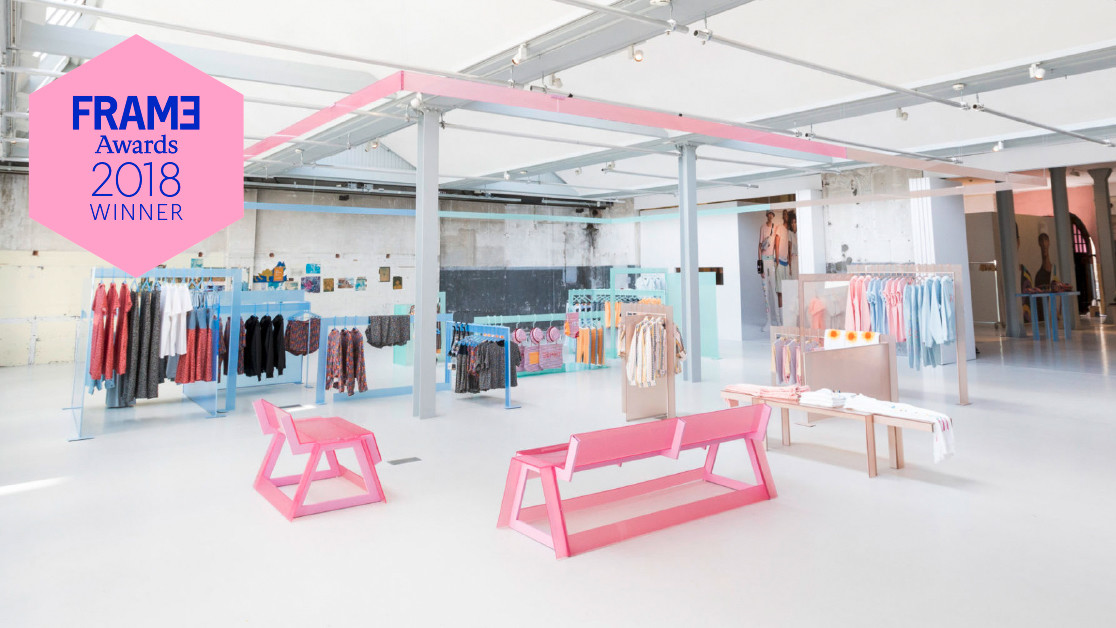 Renowned interior-design magazine Frame, awarded prizes for outstanding architectural concepts and announced the winners last month. The Esprit x Opening Ceremony pop-up store by Noman Studio in Amsterdam won the Jury Prize for best Pop-up Store of the Year. Over the past 2 years, Esprit has teamed up with the fashion retailer and label Opening Ceremony to create unique co-branded capsule collections. Drawing on Esprit's Californian roots and its designs in the '80s and '90s, Opening Ceremony reintroduced and reinterpreted the iconic Esprit style of the early years in a modern way. The light hearted collection brings back the color pop and bright graphics of Esprit, which had a great impact on the young minds of Opening Ceremony’s founder, Humberto Leon and Carol Lim. Recalling the Esprit’s early emphasis on art and architecture in its stores, Noman Studio was engaged to create a pop-up store for the collection in a well-known exhibition space for art, design and architecture. The airy space in the heart of Amsterdam’s 19th century industrial area was filled with color and light, which referenced the bright days of summer which complemented the collection. The design team, Selina Parr and Lara Tolman of Noman Studio were first asked to make a space within a space by creating an acrylic-glass box. Then during the design process, they decided to slice up the box, holding onto the shapes, the pop-out system, and the grid. They cut and flipped the walls of the box until frames appeared which they turned into racks to hang the collection from or sections to prop up other objects. The elements were placed in a grid to maintain the logic of the space. So they in fact exploded the box.Noman worked with a plastic called Myst, which exists in only nine colors, and they then chose the ones that would best complement the collection. The material is unique because it absorbs light and diffuses it, resulting in an ambient lighting. The collaboration between Esprit and Opening Ceremony resulted in a very happy and positive collection and the design team wanted to keep that spirit alive in the interior without becoming childish or funny. The group's marketing campaign images were also incorporated into the display elements in the space. The annual Frame awards, which seek to honor the world’s best interiors, are judged by a panel of designers and leaders in the industry. In addition, more than 18.000 votes were cast by Frame’s worldwide audience of interior design and architecture fans. The awards were presented at prize-giving ceremony last month with the crème de la crème of the interior design and architecture world in attendance.